Difference between revisions of "Board:bcom/winnet100"

The BCOM WinNET100 mainboard was sold by IGEL some years ago as their product IGEL-316. Their product was a Linux based terminal to work remotely with Windows and X. The hardware is still available nowadays via eBay for ca. 30-40 Euros.

(X means empty, 0 means there's a jumper on that pin) 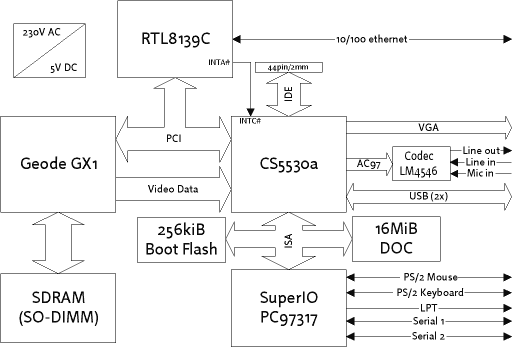 The following information was gathered on a running Linux 2.6.21 system, booted via LinuxBIOS:

Using the hardware with a current kernel

The current 2.6.22/23 kernel does not know the CS5530 interrupt router. So it is impossible to let the kernel itself setup PCI's interrupt routing. Even if you provide the kernel with a valid interrupt routing table (PIRQ). No interrupts will work as the interrupt routing registers are still left at their reset values. The small patch below solves this issue (it was rejected in mainline as it breaks various standard BIOS based Geode systems, as they were shipped with broken PIRQ tables [2]).

Since kernel 2.6.23 Geode chipset access macros are now working as expected. Due to this, some chipset tweaks embedded in the kernel are working now. One of these tweaks setup the performance incrementor for a 233MHz CPU. This may fail on a 300MHz CPU now (additionally it depends on the SDRAM speed). The symptom of this failure is a freezing system after running a while (after warm up). Take a look into arch/i386/kernel/cpu/cyrix.c, function set_cx86_inc(). Correct the setting to:

How to bring coreboot in

I was not successful to boot anything other than the software in the DoC to get some information about this board. It seems a very special BIOS as it only outputs "booting os" and nothing else. Then the splash screen comes up and the graphical environment starts. One or two times I was successful to run an update of this firmware. Because the update process fails (the server it tries to connect to doesn't answer anymore), the console comes up. That's why I know they run a 2.4 kernel with an XFree86 3.x. Their software needs about one and a half minute to boot up and supports graphical resolutions up to XGA@64k colours and SXGA@256 colours.

With my own implementation (LinuxBIOSv2, Linux 2.6.2x kernel, Xorg 7.2) I boot this machine in about 10 seconds, then the xdm dialogue occures (its a terminal, not a workstation) and supports also SXGA@64k colours.

As is it hard to get a console on this system with the original software, I found no way to reprogram the boot flash in a running system. But it is very easy to disassemble the flash memory. Only 3 screws to unscrew at the reverse.

Pull the front panel to one side, the casing to the other. Done. You now have access to all relevant parts. 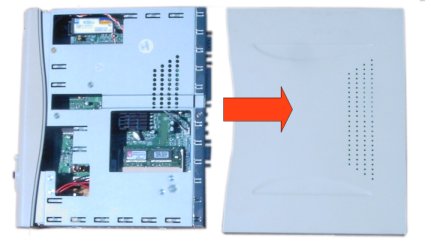 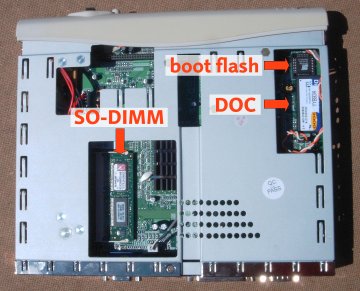 To disassemble the PLCC32 boot flash ROM you need something with a hook. I'm using my SMD tweezer. Did I mention that you will need something to burn your flash?

How to build a root filesystem

This question is easy to answer. Download the following archives:

Start with the BSP, extract it and read the quickstart in Documentation/GeoTerm-Quickstart.pdf. It will guide you through the steps that are required to:

The BSP builds all parts to run this Geode GX1 system. This includes coreboot (LinuxBIOS) and the kernel and also userland with X to run as a terminal (not as host!).

Note: This BSP includes all required patches for the kernel. You won't need the patches below.

When you build your own kernel for this target you might need the following patches: