Difference between revisions of "Board:iwill/dk8 htx"

THIS HOWTO IS DISTRIBUTED WITHOUT WARRANTY UNDER THE TERMS OF THE GNU GPL v2.

This is a short but hopefully complete walk through, which should help you getting started with LinuxBIOS (LB) and the IWILL DK8-HTX mainboard. It was written by Philipp Degler <pdegler {at} rumms.uni-mannheim.de> with the help of Mondrian Nuessle <mondrian {at} uni-mannheim.de>.

At the end of this tutorial you should be able to install LinuxBIOS on an IWILL DK8-HTX mainboard. You should also understand how to use different payloads.

Important: You should build LinuxBIOS on a 32 bit platform!

OK, before we go into every detail you should get a rough overview of the "install" process. You don't need to go through the first 5 points if you have a working LinuxBIOS image. Unfortunately, the LinuxBIOS project is not distributing ready-made images. There have already been discussions on the mailing list about that topic.

So, what will be your next steps?

We recommend using LinuxBIOS SVN revision r2481. But a newer one should also be OK. Omitting "-r xxxx" will retrieve the newest revision.

LinuxBIOS alone is not able to boot your OS directly (bootstrap). Normally this is done by grub, lilo, ntloader or another bootloader. Unfortunately, LinuxBIOS is not providing a native 16 bit callback layer any more. As grub and others are depending on that layer you obviously can't use them together with LinuxBIOS. Therefore LinuxBIOS is offering an elf-loader that is able to load and start an elf executable. The elf image is put into the ROM together with the LinuxBIOS image. In context with LinuxBIOS this elf image is called payload. So finally the payload has the task to boot your OS. You can choose between a lot of different payloads. In this HOWTO we only mention FILO and Etherboot. These two will allow us to boot a Linux OS from local disk (IDE or SATA).

FILO sounds like lilo. In reality they have not so much in common. Both can boot an OS from IDE disk. As already mentioned earlier it is not possible to use lilo with LinuxBIOS directly. FILO is filling the gap. It is fully 32 bit and needs no BIOS callbacks like grub or lilo do. You should use FILO if you plan to boot from an IDE Disk or CDROM. Etherboot would also be able to boot from IDE but FILO standalone can read grub's menu.lst and generate a nice boot menu for you. Now please read the FILO article and build your elf image. Maybe you will find our FILO config for DK8-HTX helpful.

Etherboot is an independent open source project. It allows one to boot an OS from various media:

How can I choose the driver for my network interface (if)?

If you want to add support for more than one if-driver use '--' to separate the options from each other. In the example underneath we are compiling etherboot with Intel® 82541PI and FILO support. "*.zelf" states that we want to build a compressed image which is normally a good idea.

But how do I know the name of the driver for my network if?

In etherboot most drivers cover a whole family of cards. This means you have to find out which driver family is supporting your specific device. So here is what you do: 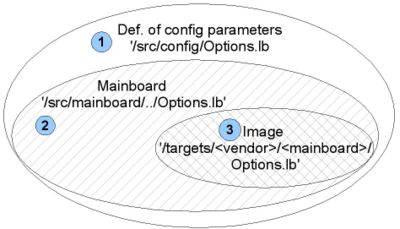 As you can see in the graphic the config space of LinuxBIOS can be divided in 3 sets. Each set comprises a number of configuration options.

Set of all Config options (1)
Typically a LinuxBIOS developer adds or changes config options during the process of development. The support of new chips and functions often leads to new config options.

Set of Mainboard options (2)
This is a subset of all existing Options. If one ports a mainboard for LB one has to decide which config options are needed in order to model the architecture of the mainboard. The maintainer sets default values that should ensure a working version for the respective mainboard.

Set of Image options (3)
Finally the image specific options are a subset of the mainboard specific options. They allow endusers to override default values. Although one can override any option the mainboard maintainer has defined it is not a good idea to do so. One should only override options that regard image settings. For example which payload to use.

In this HOWTO we want to concentrate on the image config. Normally you would only need one image to boot your PC, but changing configuration may lead to a broken BIOS. For this reason LinuxBIOS offers a fallback mechanism, that jumps into place if your normal LinuxBIOS image would not boot. We will see later how you can boot with a specific image (normal or fallback).

Normally LB can boot really fast — a lot of log messages may really slow it down. You can choose between 9 different loglevels:

You may change the default loglevel (8) by adding the following two lines to your "targets/iwill/dk8_htx/Config.lb"

Before one can access the VGA device it has to be initialized. In LB you can choose between two options:

In this HOWTO we will concentrate on the first option, because this will add full support for the VGA onboard device.

As you can see we are reserving 36KB for the VGA BIOS.

Normally you should not change the mainboard config because mainboards do not change that often. In case of VGA support we need to make some modifications so that LinuxBIOS will know where to load the VGA BIOS from. So please add the following node (the italic lines) to the "device tree" of the mainboard's Config.lb.

How would I know the size of my VGA BIOS and how do I get it?
=> The VGA support HOWTO will answer this question.
The VGA BIOS image that I extracted with "dd" is not working. What else can I do?
=> Sometimes not the complete VGA BIOS image is available via /dev/mem. In this case you better use AmiDeco tool of Anton Borisov. Read the VGA section of the Tyan S2882 Build Tutorial on how to use it.

You have compiled your payload and changed Config.lb of your target mainboard accordingly. So you are now ready to make the next step.

If you are not planing to use VGA you can leave out this part of the HOWTO.

Do you remember the configuration chapter where we reduced the size of the linuxbios.rom image about 36KB. Now we have to concatenate VGA BIOS image and LinuxBIOS image. We assume the name of your VGA BIOS image is "ati_bios.rom".

Before burning the final image it is always a good idea to check the image size. DK8-HTX has a 512KB ROM. So the "linuxbios.rom" ("final.rom" respectively) should also have 512KB.

LinuxBIOS is not compiling?

Sometimes scripts use standard output of a command to decide for example if a library has the right version. Actually this is not good style and you should post such issues if you find some. But one could solve such problems by changing console language to English. This can be done for example in your local .bashrc:

Up till now we only looked at the software part of this HOWTO. The next steps may involve a little bit of hardware. We used a BIOS Savior in order to safely install and develop LinuxBIOS. Other options include FLASH/ROM emulators and external FLASH/EPROM programmers. If you simply want to use LinuxBIOS as "normal" BIOS replacement you could skip the next paragraph and continue with compiling the flashrom utility. 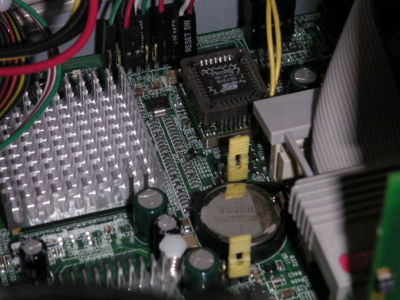 We used a BIOS Savior for development purposes. Unfortunately it is hard to get the right model in Europe. So we got ourselves a similar model and modified it a "little". Actually this was quite a hack and should not be repeated. Try to get the right one for a PLCC32 socket. The ROM chip is produced by SST and its name is "49LF004B". The BIOS Savior is produced by IOSS they provide a list to find the right RD1 Savior. As you can see on the picture on the right hand side the RD1 is a sandwich consisting of two chips. One is your original chip and one is an internal chip that comes together with the savior. Once your System is up and running you can choose between one or the other by using a dip switch. Some people on the mailing list reported problems with the quality of the internal flash part. Therefore, one would copy the original BIOS image to the internal flash part and then always (re)flash the original mainboard ROM chip. Of course you should have tested both options with the original BIOS before you really start your development. Please also read the FAQ regarding this topic.

There are also a lot of other tools that could be helpful, especially if you plan to join LB development. See here for more info.

Make sure the packages pciutils and pciutils-devel are installed on your machine.

After the first boot with LinuxBIOS, LB is saving information and configuration data in form of tables into CMOS/NVRAM. This data can be viewed and tweaked with a utility called lxbios. Show all available parameters/data:

Set a parameter to specific value. In this example set default boot to "normal" image.

Where can I download lxbios?
=> have look at sourceforge.net.
I switched to "Normal" image with lxbios but it is not booting correctly.
=> after three successless boots the fallback mechanism sets in and tries to boot the fallback image.