From coreboot
Revision as of 09:43, 26 March 2010 by Stepan (talk | contribs) (→‎Bootloaders)
(diff) ← Older revision | Latest revision (diff) | Newer revision → (diff)
Jump to navigation Jump to search
The printable version is no longer supported and may have rendering errors. Please update your browser bookmarks and please use the default browser print function instead.

SeaBIOS is an open-source implementation of the standard bootstrap callback layer implemented by an x86 bios. It enables booting from unmodified cdroms and hard drives.

SeaBIOS has been tested with Linux, NetBSD, FreeDOS, and Windows XP/Vista/7. Classic GRUB, lilo, and isolinux work well with SeaBIOS. Other x86 bootloaders and operating systems will likely also work.

GRUB 2 is the official version 2 of GNU GRUB.

You can use the official GRUB 2 as a coreboot payload, in order to boot and operating system from a hard drive, for instance.

An old version of GRUB2 with coreboot and crypto support.

You can use GRUB2 as a coreboot payload, too, in order to boot and operating system from a hard drive, for instance.

FILO is a simple bootloader with filesystem support.

Etherboot is a network bootloader. It provides a direct replacement for proprietary PXE ROMs, with many extra features such as DNS, HTTP, iSCSI, etc.

The new GPXE is not yet supported directly, various code changes are required before it can work as a coreboot payload. (Note, GPXE works well when run with SeaBIOS.) 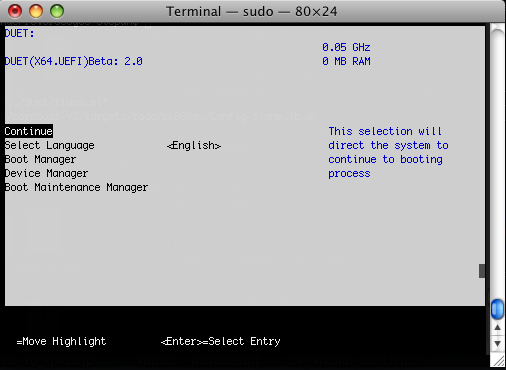 Alternatively, you can also boot a Linux kernel from your hard drive using either the FILO, GRUB2, or SeaBIOS payloads.

FreeBSD can be booted via coreboot with the help of ADLO.

OpenBSD can also be booted via coreboot with the help of ADLO.

This use-case is not well-tested yet, though.

NetBSD/x86 boot code is known to work with SeaBIOS.

jakllsch has worked on a partially-complete port of the x86 boot code to the role of native payload. However, with the advent of SeaBIOS, this is likely to become less of a priority. Consult Coreboot and NetBSD for further information.

Windows can be booted with the help of SeaBIOS.

OpenSolaris has multiboot compliant kernels, and so it is possible to boot it with GRUB2 (pending some bug fixes). Some Sun engineers even worked on it, see http://bugs.opensolaris.org/bugdatabase/view_bug.do?bug_id=6475349 for information.

Currently, GRUB2 refuses to load the kernel due to a small bug in the multiboot header of the kernel, but the kernel still refuses to work if that is worked around. Maybe they reintroduced some BIOS calls again?

Memtest86 is a program which checks your RAM modules.

It can be run from within GRUB, but also as a coreboot payload (i.e. included in your ROM chip).

It can either be started from within GRUB (as a "kernel"), or it can be used as a coreboot payload.

The following payloads might or might not work (with more or less changes required) with coreboot — their usage hasn't been tested or documented so far.